Hey folks, todays topic is going to be an experiment. Im calling it the Geekend post. See, Im a geek. I play video games. I like sci-fi. I like all things in the nerd kingdom. And hey, IT folks are known to be geeks, too. And I know from various posts that at least some of you guys proudly fly the geek banner.

So, every Friday afternoon, Im going to talk about stuff I love --gadgets, games, movies, and the people who make them -- and Im not going to worry about the enterprise. Just once a week. One post, for a little bit of fun so we can enter the weekend on a high note.

Today, I want to talk about a fabulous real estate venture. It is a world class resort with 17 out-of-this-world exclusive retailers, a fabulous club called Stahlsteiners which boasts a major star following, and expansive grounds with some of the most exotic plant life youll ever see. Every Saturday the resort sells out its famous shows, and visitors can even book special hunting expeditions. The amazing thing is that this resort can be had for $330,000. Not bad for a resort, huh? What if I told you this resort was in a space station orbiting the planet Calypso? What would you pay, now?

In case you havent figured it out yet, the resort is in a virtual world. It is the Crystal Palace Space Station (pictured below) in the game Entropia Universe. And it sold in 2010 for $330,000 real US dollars, a world record for virtual goods. Would you pay six figures for a piece of digital real estate? 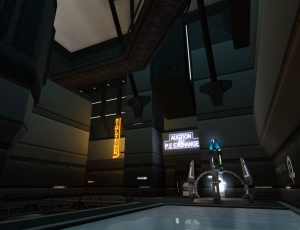 Before you answer, let me tell you that the selling of virtual stuff for real money is a $2 billion a year industry. And Buzz Erik Lightyear, the owner of the Crystal Palace Spacestation is sure he is going to make his money back by selling virtual tickets to shows, goods in the virtual shop, and from hunting fees.

And this isnt an isolated case. From simple Facebook games like Farmville to fantasy massive multiplayer games like World of Warcraft, virtual markets (sometimes sanctioned and sometimes illegal in the game universe) are popping up to help people buy the stuff they want most in the game without having to go get it the hard way. And some people are making a profession out of collecting and selling virtual swag. What are people buying? This chart breaks it down.

The thing is, we cant sneeze at these virtual economies because they actually show us a lot about the real economy in microcosm. They have inflation, supply and demand, consumers, producers, and everything else. And some games have even collapsed because they got the money wrong. It was either too hard or too easy to get what people wanted in the game. We learn a lot from these economies, especially the ones who successfully adapt to problems as they go.

But heck, this is the geekend post. I dont want to talk about what we learn. I want to talk about whether it seems fair to buy this stuff. Personally, I play games so I can earn the +10 Slaying Sword of Super Magic, not so I can buy it in cash to use it on some measly little wandering giant rat and watch how easy it is to kill something. The achievement is what Im after. I honestly wonder who the person is that pays real money for fake stuff. Especially fake stuff that can be copied again and again with some simple lines of code. And yet clearly, other people feel differently to the tune of $2 billion per year.

What do you think? Thumbs up or down on the virtual goods economy? Would you spend real money on fake stuff? Have you done it? Anyone ever consider (like me) whether they could make a living selling fake stuff online? Anyone ever succeed at it? Its OK to tell us. Were all geeks here.